From Dance to Dinosaurs

This blog post was partly taken from an interview I did with dancer/writer Kerry Aradhya for her blog for Picture Books and Pirouettes. http://kerryaradhya.blogspot.com 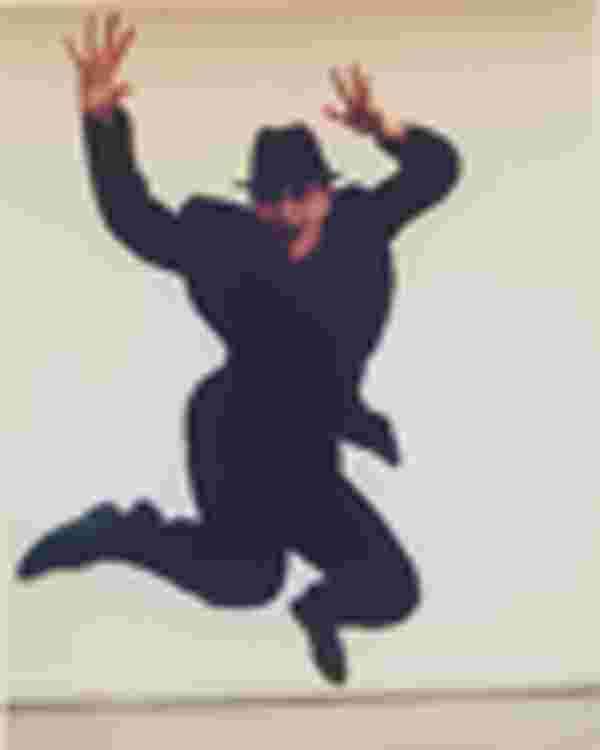 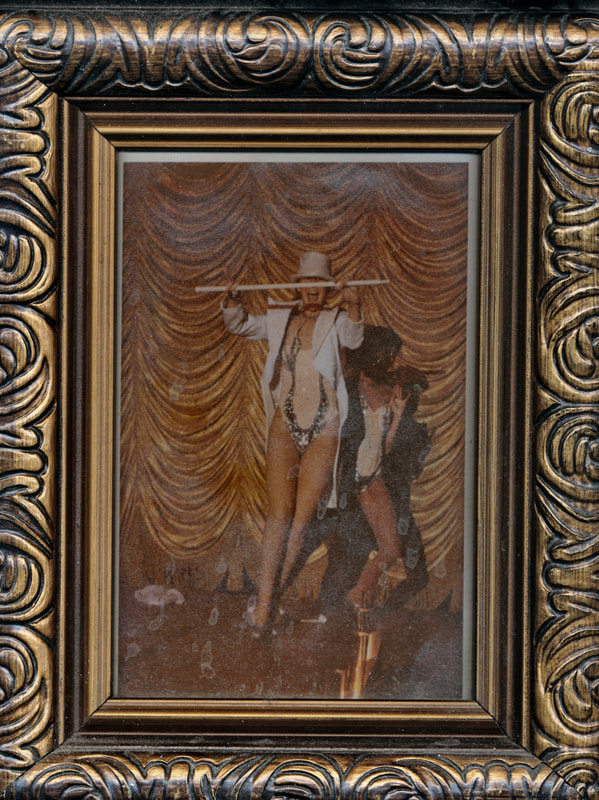 I started dancing when I was a child at Sonia’s Dancing Academy in Saskatoon. I seemed to have a special talent for tap dancing, and after receiving a trophy for “the most outstanding tap performer” at a dance festival, I was hooked.
​ A little praise goes a long way!

I kept taking jazz, tap, and ballet classes and even helped my teacher Sonia Fabian in teaching little kids. When I finished high school, I decided to continue my studies at the dance college at Ryerson University in Toronto. I had found my path in life!

I was so happy in Toronto because I had found a group of people who loved dance as much as I did.​ I was dancing from morning until night. I would even come to the campus on the weekends for extra ballet classes. After graduating,I auditioned for stage shows and began dancing professionally on TV and in shows around the Toronto area.​I was in a show at the Skyline Hotel for a year and then decided to go to Winnipeg when I was accepted for an apprentice position
with Winnipeg’s Contemporary Dancers. I danced with them as an apprentice for a year and then started a theatre company “Canadian Content Theatre” with some theatrical friends of mine. We travelled and performed our original shows all around Canada for over 15 years.

That’s when we created our show “Listen to the Bones.” It was a musical theatre show all about dinosaurs and was initially in collaboration with a touring Dinosaur Alive exhibit that was at the Manitoba Children’s Museum for a summer.

​
My book title When Dinosaurs go Dancing is from a song in our “Listen to the Bones” musical. There is a dance I would always do with the kindergarten-grade 2 students. I kept thinking that somebody should write a book based on this song, but when I realized that I was probably the only person who would ever do it...I started jotting down ideas for the book. 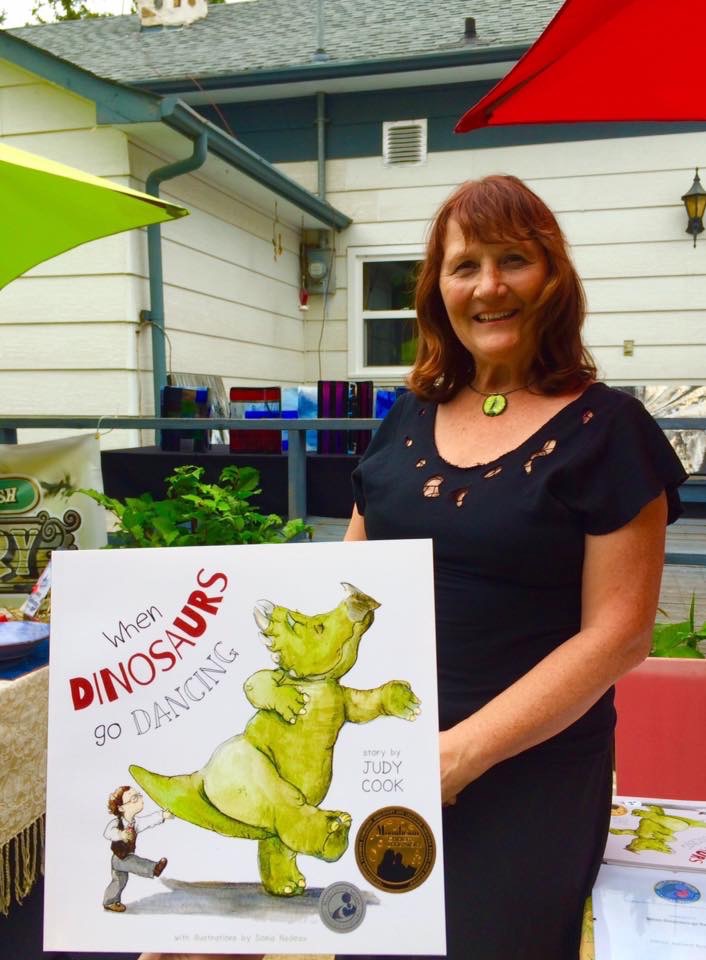 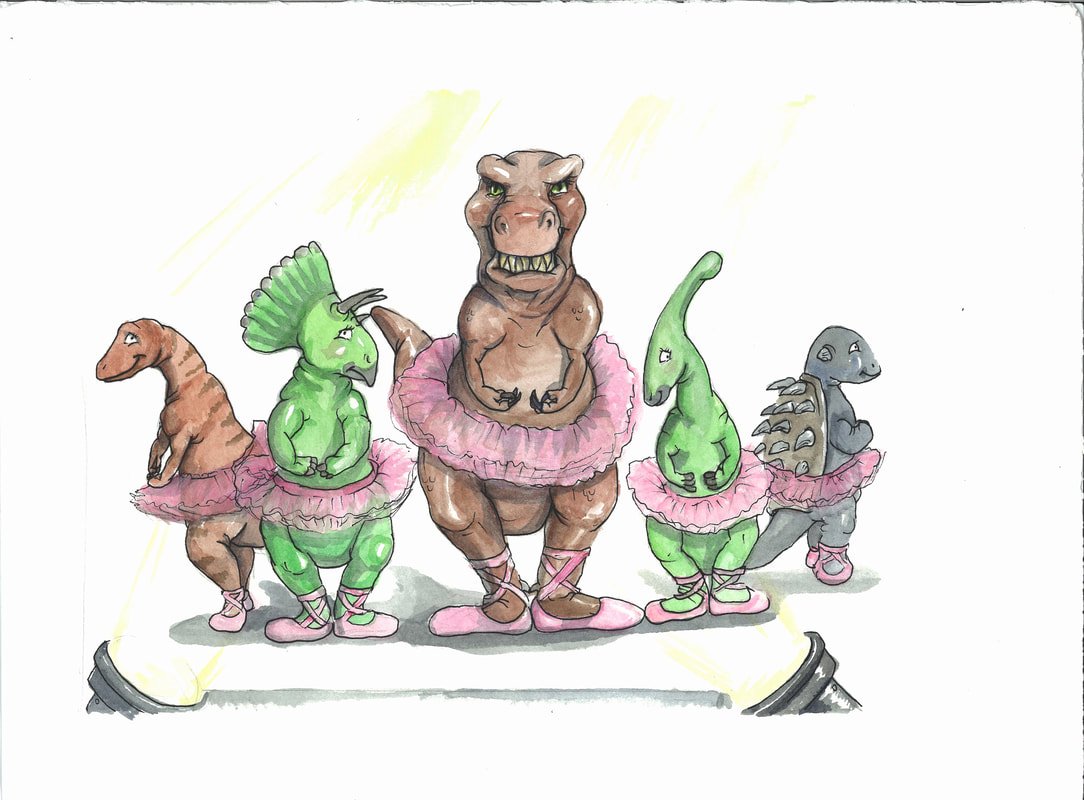 Financing as an independent
​

​Writing the book was a long road for me….12 years. I didn’t know how a person went about publishing a book. I was talking to an old school chum from Saskatoon about my idea. His kids had loved our dinosaur song “Listen to the Bones” when they were growing up. He took out a cheque book and made out a cheque to me for $5,000! He laughingly said that if I make a million I could pay him back some day. OK, so I didn’t make a million dollars but I did finally pay him back. Thanks Bob, I couldn’t have done it without you and all the support I received from other friends and family.

So that’s how I got the money to pay an illustrator, and that’s how I met Sonia Nadeau, who is now a dear friend of mine! I also went to a publishing workshop at Humber College in Toronto, so I went into the project with wide-open eyes, realizing that it was very difficult to sell a lot books, and even to make back your money, especially if you are trying to do it yourself.

After I got the money I looked around for an illustrator from Winnipeg, and when I saw Sonia’s work I immediately knew she was perfect for the book project.

I was used to collaborating with other artists in all the previous creative work I had done and because I was so close to the dinosaur material for so-o-o many years, I just knew I needed a more hands-on approach with the illustrator. Sonia was also close to the material because she had a job in a day care and just by chance had been using our music with the kids in her classes for six years! I went to her day care…and gave the kids a dance workshop and we recorded the kids dancing to the music. Sonia used the video for some of the inspiration for her drawings. I also knew I wanted the dinosaurs to be taken from scientific renditions, and Sonia has a friend who draws dinosaurs for encyclopedias, so every dinosaur in the book was drawn that way! Sonia and I share a particular sense of humour, and we had lots of meetings and were on the same page from the start. She is a delight to work with and I hope to continue working with her.​​(that's my sweetie Rubin in the dinosaur costume) Thanks Ruby! 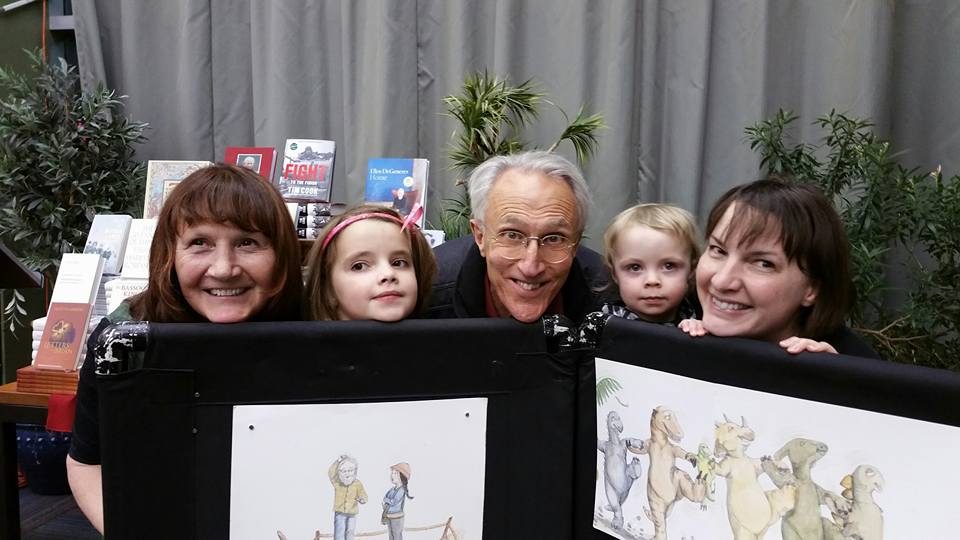 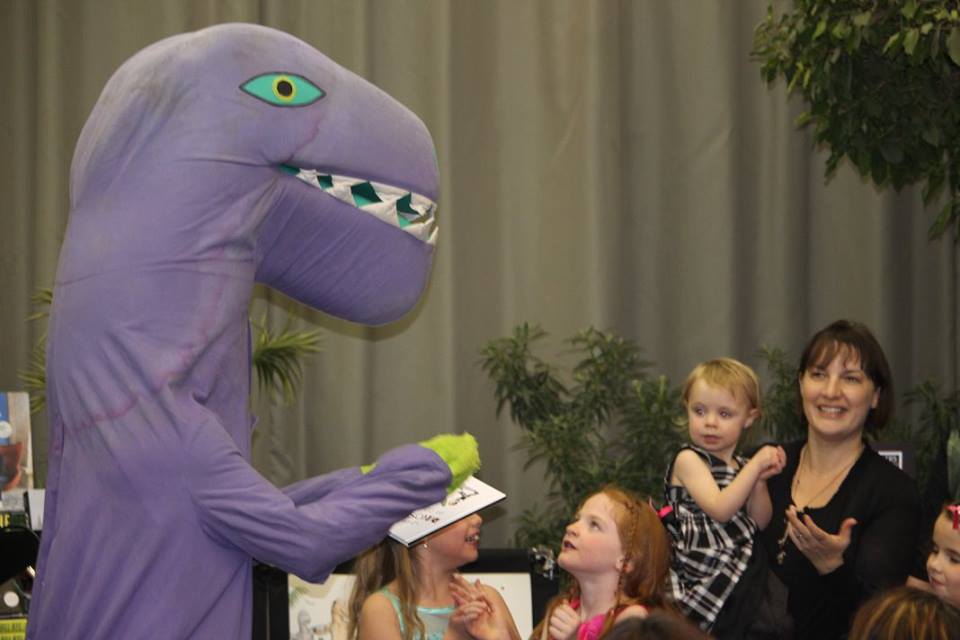 Dancing in the Schools

I have done a lot of work in schools with my theatrical dance program in which I choreograph with the students and then all the classes perform for each other at the end of the week. I have worked with many students who have had extensive dance backgrounds mixed with others who had none. It has been my creative challenge through these many years to guide the students to feel confident as they show off their many talents. What a joyful job! In the future I plan to share my books in schools with a combined dance and book reading workshop. 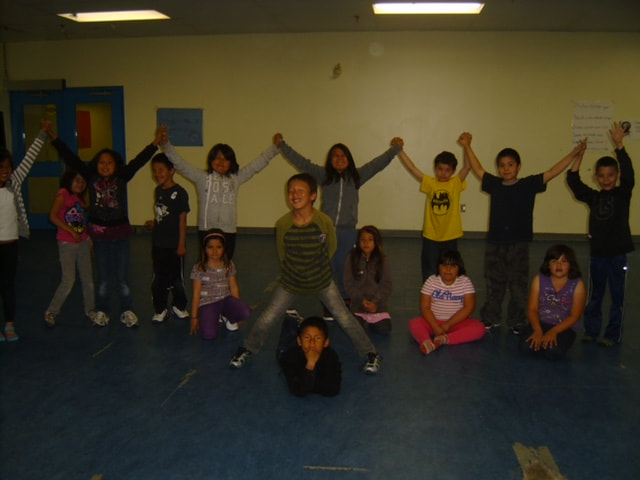 That’s where my theatre training comes in handy. If somebody in the class has a special talent, we just choreograph it into our piece. My objective is for everyone to have a positive experience with the art form of dance!
Th​ere is a hand dance "Back in Time” from our musical that I use with the kids for creative transformations…We theatrically change from being the wind…to becoming a fish….to flying like a Pteranodon. The kids can work together as a group. ​Our group,Canadian Content Theatre performed the song “Back in Time” with Symphonies all across Canada. I mentioned that in one of my posts on-line and the conductor from the Virginia Symphony connected with me.I sent him our symphony charts and they did their own version of the song in their Symphony Dinosaur show! Here is a picture of their young dancers reading my book! https://m.youtube.com/watch?v=TCV1f4bFRhM 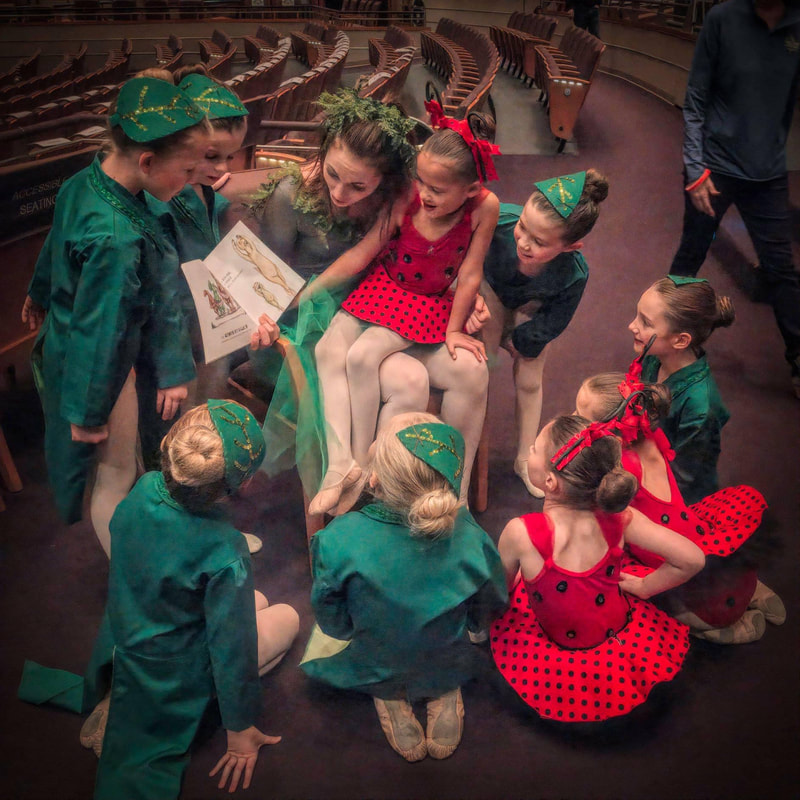 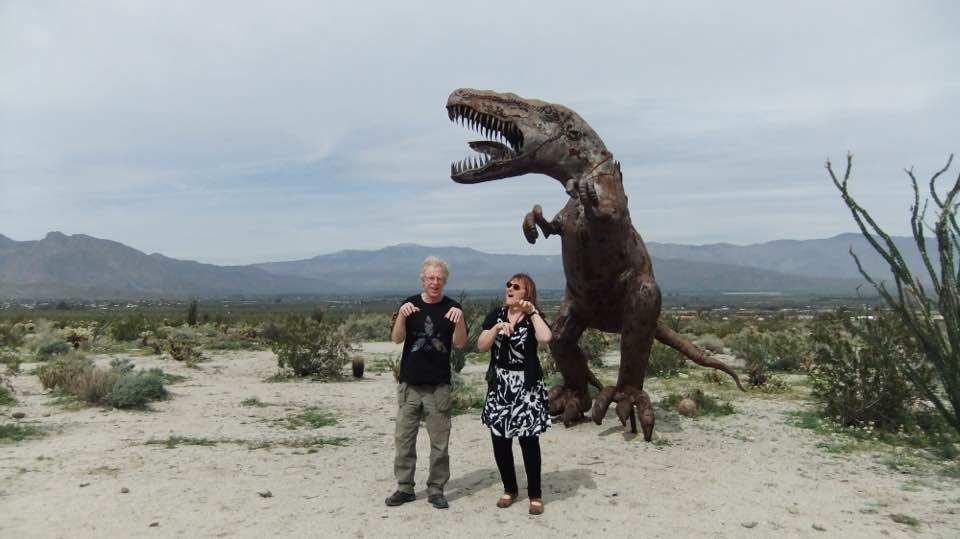 ​My partner Rubin Kantorovich and I wrote a song called the "Bruce Rap" It’s all about the mosasaur I mention in my book. When I was doing a school workshop, the students  learned the words and choreographed cool moves to go along with it. Then they performed it for another class! They LOVED that activity!
This is a picture of some of the participants from one of my school book readings.
​ 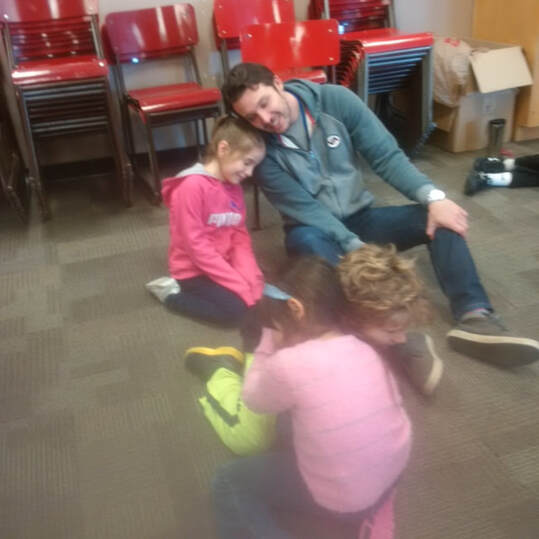 "​When the night is over, and the dancing is all done,
the dinosaurs are tired from having so much fun.
They greet the dawn with a dinosaur yawn and with weary dinosaur feet,
they plod downstream where the dinosaurs dream
and trundle home to sleep.” 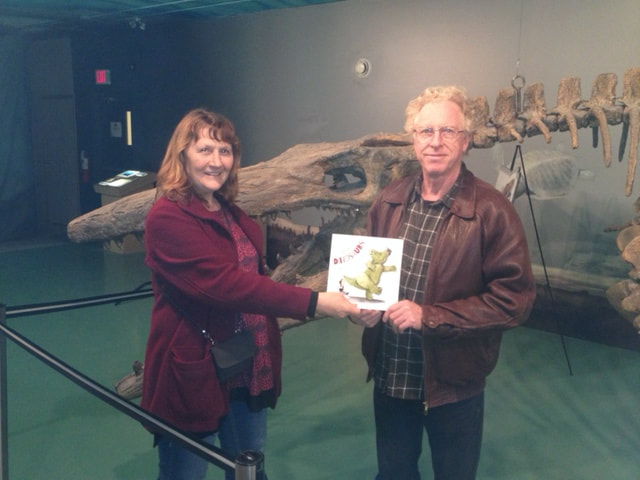 ​
The fossil skeleton of the mosasaur is on display at the Canadian Fossil Discovery Centre in Morden, Manitoba. https://discoverfossils.com The Friesen Press printing press is in Altona -- a town close to the fossil museum. They printed 2,000 copies of the book for a big giveaway at the Altona Sunflower Festival a few years ago. It was so fun to be able to give books away and not have to worry about making my money back. That was a fun event AND FriesenPress gave me 250 free paperback copies. 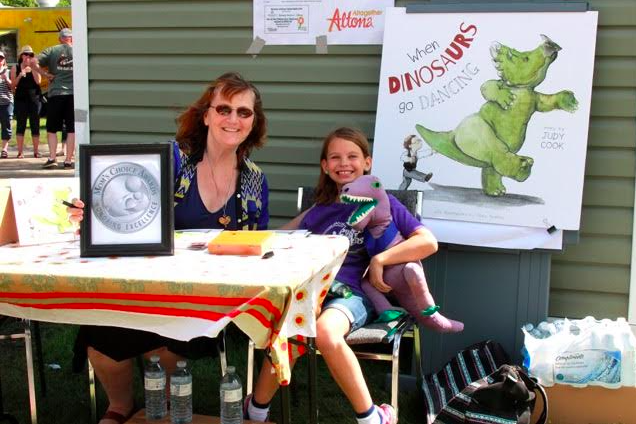 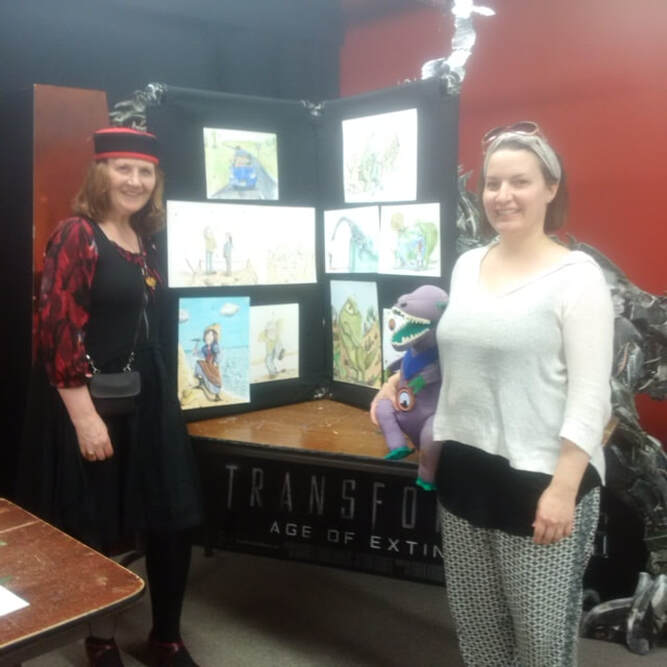 Sonia and I also had a book launch at the fossil museum. I did the dance with the kids, and Sonia gave an illustration workshop along with the reading, and we premiered the “Bruce Rap" song.

​ I have recently published my second book with Sonia and with Friesen Press.https://bit.ly/3bAh76H Right now I’m working on trying to find ways to distribute both books to schools, science museums and public libraries. Some of my friends who are teachers have told me they use the book in their classes and are having a lot of fun with it.
The Mom’s Choice Awards https://store.momschoiceawards.com/product/5598 named When Dinosaurs go Dancing among the best in family-friendly media, products, and services.The book also received a bronze e-book Moonbeam award! https://www.moonbeamawards.com/56/winners/moonbeam_awards_program_2015.pdf Our new book, The Children’s Moon was a gold Mom’s Choice Award winner. Rubin and I wrote two original songs to accompany the new book-The Children's Moon and Hey Mr. Moon.

It’s fun to share with people the background of how it all came together. I have learned so much about the book business by doing this project, and maybe my story will help inspire someone else out there to keep their dreams alive and perhaps create their own book!